Went to the most wonderful natural hot spring yesterday: 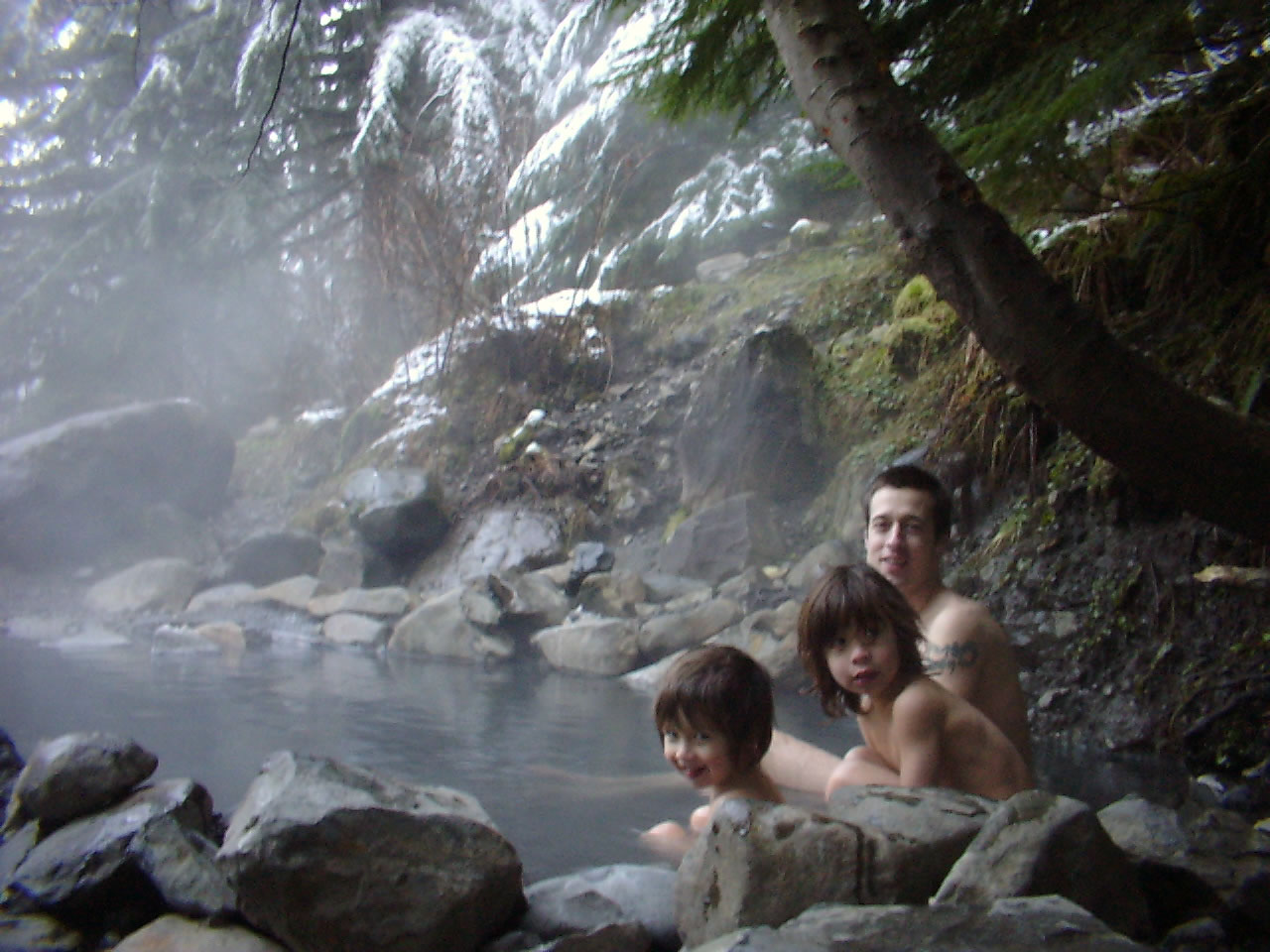 From this site, we looked for natural hot springs with the least hiking time, with relative proximity to Vancouver. Olympic in Washington was the best we could do.
We left at 7, in our new mini van (not exactly new-new). We arrived at the border where I got in trouble for not having my passport. We then proceeded on, past Bellingham to Burlington and turned west on the W20. I hadn’t read the instructions from mapquest that closely and discovered there was a small ferry ride, but that was OK, we got on right away and slowly made our way through the beautiful Deception Pass.

We finally wound up in Port Angeles from where we could see Victoria BC across the water.

About 16 km from there we found ourselves in the Park which contains the hot springs. As written on the web site, the hotsprings are not promoted by the parks’ people at all. None of the maps at the entrance of the park make any reference to it. I was warned about this on the web site, so I knew not to be discouraged by this. But there were some indiscrepancies on the web site, like the name of the road, and its distance from Port Angeles. Finally, half way up this windy road I saw a guy on a bicycle going full throttle up the hill. I stopped just a few meters in front of him, and I guess by my BC number plates and what not, he knew I was a little lost, came up to the side of the van and confirmed we were on the right path and gave me the goods on the good pool. He was sort of a hippy type dude, and spoke to me like “I knew what the mission was to be accomplished”. I felt honored by that acceptance into the brotherhood despite my disguise as “a nice family man with his family on the way out in the national park”.

Finally when we reached the end of a long windy road through the park, we came to this place that says “hotsprings, 2.5 miles”. Here there was a large group of cars very similar in appearance to the cars parked on Marine Drive on the way down to Wreck Beach in Vancouver.

However, we were way behind schedule. I knew that 2.5 miles meant a long walk for little kids. My faith was dwindling again. Just then our hippy-bicycle friend caught up with us and said “see ya up there”.

I knew that we were rushed, and ended up carrying Leon up most of the way. After twenty minutes we came to this river that was impossible to cross unless you hat deep rain/fishing boots on, or… did as we did and took our socks and shoes off, and piggy backed the kids across. Since the water was near zero degrees, I threw my shoes across so that I’d have to go…. After drying my feet off and putting my dry socks and shoes back on, it was the most wonderful feeling… (like getting dressed after canoe-dumping practice in April in Alberta, something I did in 86′). 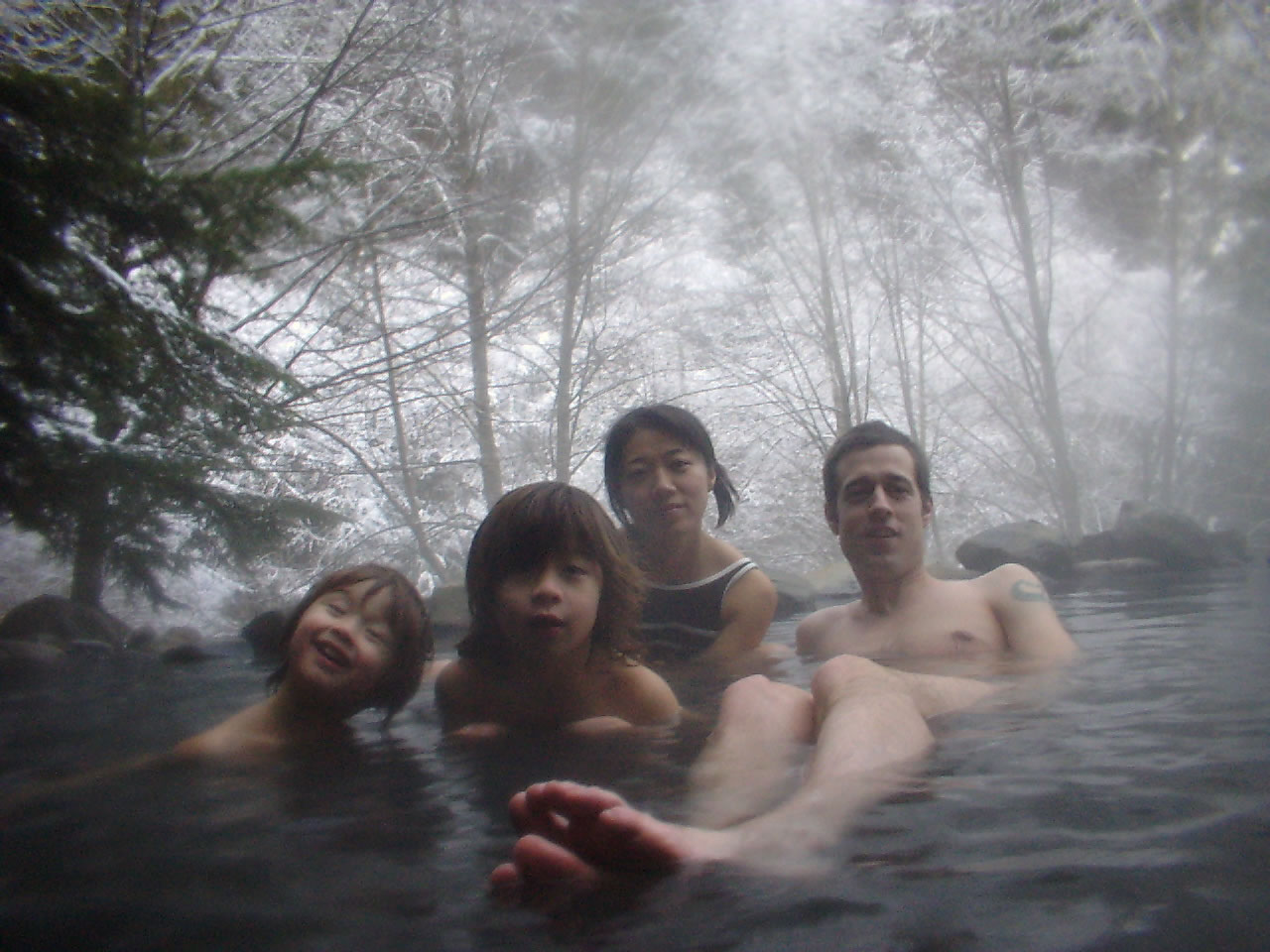 After that I was convinced the worst was over and I’d shown my dedication to the mission. Up until then we met groups of young hippy looking people with tents and what not going up and down. But just then we met the first respectable family, two parents in their mid 40s with a 10 year old girl. They told us to reconsider, as their girl had a hard time, but they had gone all the way in two hours… TWO HOURS I’m thinking.. If we left at 3:15, then it’ll be … dark on our way back.. Part of their warning was there was a much worse crossing than the river I just beared, with an ice-covered-log bridge with only one handle… It turned out to be much worse than that.
We decided that we’d turn back at 5pm no matter what.

A few years ago a family friend, Hayashi-san and Susumu (Otoosan) were surveying some mountains in Mie Prefecture when they got split up. Hayashi-san was lost in the heavy raining pitch-black forest for more than 14 hours until a search crew found him. We didn’t want our family to have the same experience. Also I realized that we were out of liquids. Nana and I had each thought the other had the drinks, so the 500 ml bottle of juice we had was long gone and I was thirsty. However not long after, we discovered a little stream. I had my drink and filled up the 500 ml bottle and away we went.

Nearly forty-five minutes later, we stopped for lunch, and resigned to the fact that we’d probably not make it before 5. Just as we finished, a gentleman coming back from the top, asked me “first time up?” He then proceeded to advise me that we turn around immediately, as a 10 year-old-girl almost didn’t make it across. After we walked on, a younger member of his party turned to me and nodded as if to say “go for it”.

Just around the next bend we discovered the icy-log bridge. Up until this time, Taz had been in regular “park mode” enjoying himself taking little side paths and catching up with us ( which wasn’t hard when Leon was walking). But here I stopped and explained to Taz like this: “Taz, when we’re in Stanley Park, I don’t mind so much when you jump from boulder to boulder or what not, because we are always 5 minutes from a hospital. But here we are 5 hours from a hospital. So you need to be extra careful. No more climbing or jumping than is absolutely required. And don’t worry, there is plenty of required climbing.” Taz was incredible. He understood the gravity of the situation and was really in survival mode.

The terrible part was getting down to this icy-log bridge. The path was at a 30 deg angle down and total ice. I tried to convince Nana that the snowy edge was the safest, but it was the edge that went almost straight down into a rocky river, so chances of… being OK after a fall were slim. Once we got down to the icy-log bridge, I carried Leon under my right arm like a painting or something. ON the other side I found an equally challenging icy path up. At one point I found it only possible to get us up by slightly throwing Leon up onto a level path. He was so in-tune to my gestures and movements. It was 20 mins to 5pm and we were still OK. We went on and on and then found the easy bridge (see pics). A little past that, I saw the steam…

4:59 and we were stripping in to get going. Only Nana came equipped with swim-suit but that wasn’t a problem. Apparently the lower pool or first one is like Tower-beach, friendly to both nudists and swim-suits, where as the upper pool is the nudist only pool. Time was our only concern. I was surprised how perfect the water was. No taps or electronic-controls could have made it more perfect. Our efforts were rewarded and we were having a lovely time…
Sometimes the wind would blow and it would make snow crystals shower down over us. One gust made it feel like a snow storm for about 10 seconds. But it was mild and clear and aside from the time, perfect winter bathing conditions.

Just then our hippy-bicycle friend came by. Gave us the scoop on the upper pool. I said we’d definitely make it next time.

It was time to go. We were in a race to get over the two great hurdles before it got dark. 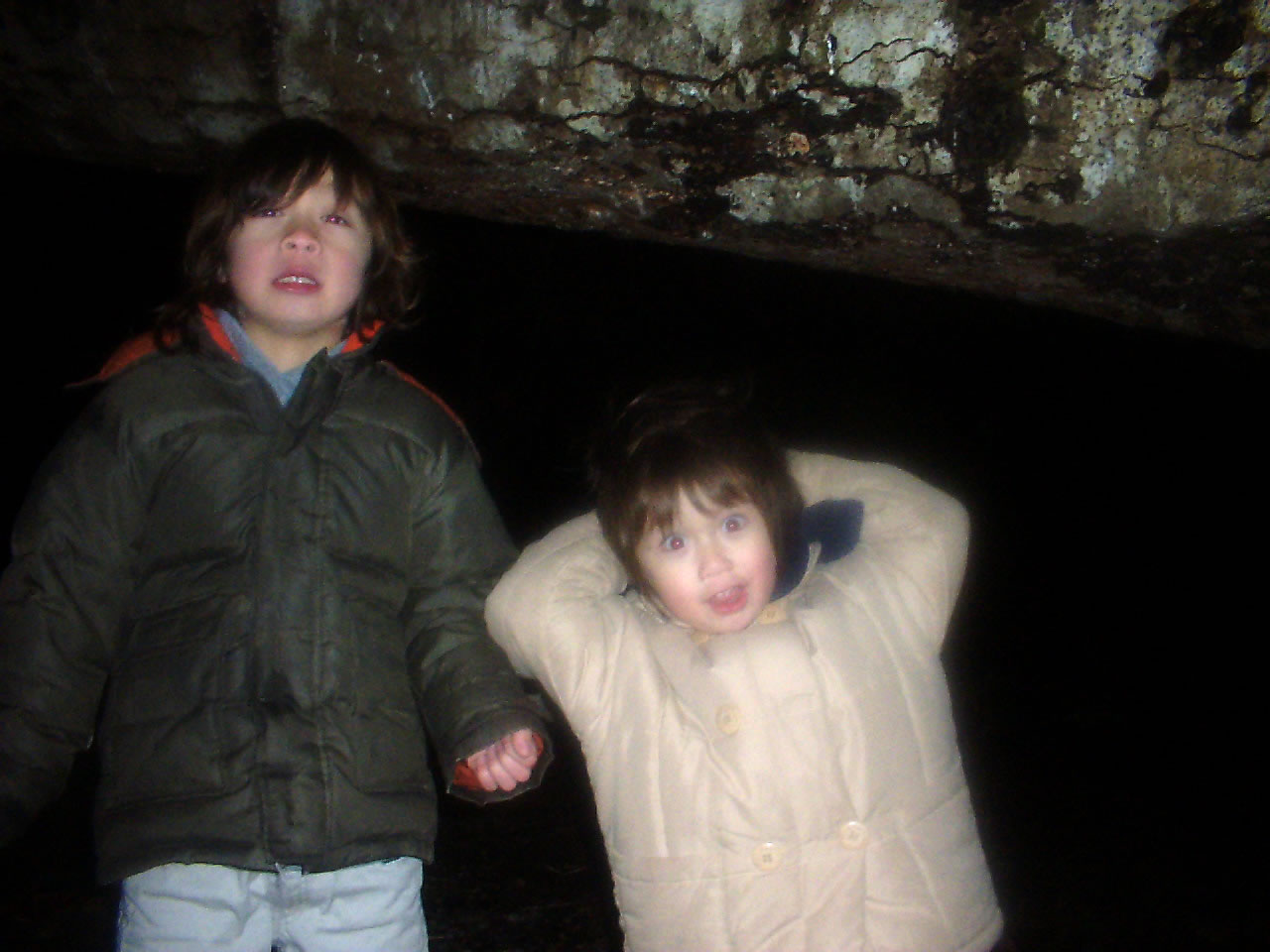 It did get dark, but a near full moon was on our side. In fact everything was on our side, we made it down in 1 hour 40 mins, made the last ferry for the evening at 8:30, cleared the Canadian boarder with little problems and made it home in 5 hours, a trip which took 8 to make in the morning.

It was a little hard for a day trip but well worth it…
We will be exploring more natural hot springs this year.

One unfortunate thing happened, my compact flash card was corrupted and I lost a huge number of pictures. We did manage to save the best ones of the family in the snowy natural hotspring. Log in to view the album and click on 050220 to see the pics of this adventure.