I love it when people say, I’m so jet-lagged, New York has a 13 hour time difference to Tokyo.  Then the guy from LA says “you think that’s bad, there’s a 16 hour time difference from LA to Tokyo, so I’m even more jet lagged than you…  According to that logic, people traveling from Honolulu to Tokyo must have terrible jet lag with a 19 hour difference, and traveling from Honolulu to Auckland must be worse than space travel for jet lag with it’s 22 hour time difference.   Wake up! When you fly from America you have one long day (or night) and the date artificial changes at the date line, but actually according to local solar time, you can never have a greater than 12 hour difference… it only gets less when you pass the other side of the world….

“You lost against So-and-so in a 5×5 game and received a consolation prize of 25 gold. 4:12pm” is what I see when I try to continue my game at Facebook’s “The Dot Game”.  How on earth can I have lost if it’s the middle of the game… 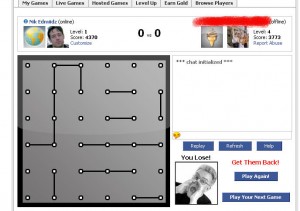